Author of Human Rights and the Image of God; Christendom Trust Research Fellow (2000–2004) at the Centre for Law and Religion, Cardiff Law School

Sponsored by the Justice and Peace Commission of the English Dominican Province, of which he is a co-opted member, Roger obtained funding from the Trust for a research and writing project on human rights and theology.

Central to his research has been a study of the origins of natural rights concepts in Christian political theology in the formative early-modern period in Spain (the Dominicans Francisco de Vitoria, Domingo de Soto and Bartolomé de Las Casas) and England (John Locke). The object of the work has been to throw light on the development of human rights by Christian theologians before the secular Enlightenment, in the context of early European colonialism; and the subsequent ambivalent attitude of the Church towards modern human rights ideas in the face of secular liberalism. On the one hand the Church wants to support justice towards the poor of the world, on the other hand it resents the intrusion of liberal, individualism into its internal life.

The outcome of this work has been:

Human Rights and the Image of God, published by SCM-Canterbury Press, July 2004, £18.99, 312pp.; see below for a  synopsis of headings. And Human Rights and the Image of God, a conference organized by the Dominican Justice and Peace Commission, held at Blackfriars, Oxford on 16 October 2004, with substantial inputs from: Ian Linden (internationalist and author of A New Map of the World, DLT, 2004);  Tina Beattie (theologian, author of many books, including Woman, Continuum, 2003 and lecturer at Roehampton College, University of Surrey);  Annabel Brett (Cambridge historian and author of Liberty, Right and Nature, CUP, 2004);  Christopher Insole (theologian, author of The Politics of Human Frailty: A Theological Defence of Political Liberalism, SCM Press, 2004);  and Nicholas Sagovsky (Canon Theologian at Westminster Abbey). 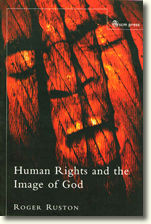 Human Rights and the Image of God

The clash of rights in secular society

An alien concept for religion?

2. An Awkward Embrace: Human Rights and the Church

John XXIII and Pacem in Terris: a new role for the papacy

Vatican II and freedom of religion

John Paul II and ‘the culture of death’

Rights of All the Faithful in canon law

A question of ecclesiology: familial and conciliar models

Some questions and a direction for this book

A share in the world’s goods? � unfair trade and the poor

Natural right and community of possessions

Objective and subjective right: the ‘right thing’ and ‘my rights’

Politics in paradise: the divine gift of government

Image, reason and capacity for God

4. Right of War and the Law of Nations

Vitoria’s letter about the robbers of Peru

The requirimiento: conversion or death

The supremacy of law

Sinner’s rights to property and self-government

Barbarians, the image of God, and true dominion

The right to hunt

Domingo de Soto: the free person in the free community

Conclusion: the School of Salamanca

7. Freedom and the Gospel

Narrative of conversion and resistance

The gospel and the natural people

The liberty of the sons and daughters of God

The New Laws � a hollow victory?

8. Defender of the Indians

The great debate of 1550: Las Casas and Sep�lveda

Who are the barbarians?

A right to eat people? The extent of religious freedom

Heretics and Africans � a test case

Conclusions: the most precious gift of freedom

The sale of the century: Philip II and the encomiendas of Peru

Power of kings, consent of subjects

The need to justify political power

What touches all should be approved by all

Covenantal politics: rights to and rights over

A scandalized friar and this twelve questions

States and individuals at war: after Grotius

Locke in the United States: neo-liberalism and Lockean rights

Narrative of rebellion: the Exclusion Crisis of 1681�3

Revolution or status quo: how egalitarian was Locke?

The patriarchal enemy: rule of fathers or consent of equals?

Reading the Two Treatises as theology

13. This Great and Natural Community

Natural duties and political obligations: the limits of consent

Because God commands, or because it is right?

The state of nature has a law to govern it

Workers and their products: the origin of duties and rights

Of property: the labour theory and its influence

Money: how it enhances labour

15. The Vacant Places of America

Making the most of God's gift

Puritan virtues in the ‘waste’ land

‘Male and female he created them’: separating dominion from maleness

Two views of natural law: thick and thin versions of the good

If you just do not understand you can understand it to read or to buy finasteride and again as many times as necessary buy propecia that's not suitable for everything and this is understandable.