Stations - The end of the line for unlettered lives

Carving Wombwell Stations is a project that is using the lettering of stones and their place in the landscape to explore forgetfulness and the cost of past lives. It will provide an invitation to walk among a landscape of loss and to bring to mind the price paid for belonging and working there. 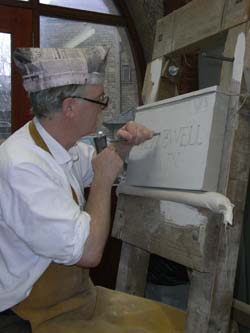 A starting point for Stations is the lost world of colliery railways and the end of their lines at each coal mine. The Dearne Valley in South Yorkshire is a landscape in which much evidence of the recent industrial past has been forfeit, where communities have lost the economic and social cohesion that came from coal-mining and are challenged with recovering material security, identity and self-respect in a scene that has changed dramatically and very fast. It is a particular locale, yet shows what is now a very widespread loss of character, and symptoms of a common sense of not belonging.

In religious life, ‘stations’ are stopping points along a walk of pilgrimage at which particular reflections are invited, most obviously in the Stations of the Cross which make up the Via Dolorosa of the Christian narrative of sacrifice and the discovery of new life through re-membering. Taking this tradition as a cue, Stations will comprise 14 pieces of stone, each cut with the name of a different lost colliery rail terminus in the Dearne Valley. Sober proportions and classical lettering will add a solemnity to the recall of place and, as with Roman street signs which each bear the number of the rione or district, the stones will have the numbers of the National Coal Board division and area for each of the pits. A Coal Measure sandstone of reticent hue has been sourced in Yorkshire and the pieces will be sawn to size and honed at the quarry by local workers ready for lettering. One station for Wombwell Main is being cut as a sample.

The disposition and performance of the Stations within the landscape of the Dearne Valley will be an integral part of the project. The lettered stones will invite a walk between them, in any order or none, prompting reflection on loss and narratives of recall.

Stations is a project inspired by research on sustainability and belonging carried out by Professor John Rodwell for the MB Reckitt Trust (). Alan Ward (top right, carving the stone for Wombwell Main) is a letter-carver and sculptor who has Public Art in many parts of the UK as well as in Germany and the Czech Republic. On a Travelling Fellowship from the Winston Churchill Memorial Trust, he spent six weeks in Italy researching and carving the kind of letterforms being used in this project.

If you just do not find out you can understand it to read or to buy finasteride and again as many times as necessary buy propecia that's not suitable for everyone and this is understandable.